First of its kind breast milk depot opens in Connecticut 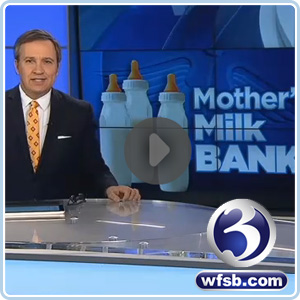 GUILFORD, CT (WFSB) – A first of its kind breast milk depot is providing much-needed sustenance to infants in need.

“At first I really didn’t know what the milk went to but then I found out it went to all the NICU babies and I was more than happy to donate as much breast milk as I could,” said Amy Farotti, a breast milk donor.

Farotti said she had her baby Charlotte10 months ago.

The married 30-year-old mother of two from North Branford said she’s a nursing mom who produces more milk than her baby needs. She said she felt compelled to not let the extra go to waste.

“I couldn’t even imagine being a woman watching their little baby grown in an incubator for six weeks or longer of their lives,” she said. “So if I can help in this little way, I am more than happy to.”

Farotti said she became the first donor to the first Human Milk Depot in Connecticut. It’s located inside Acelleron Medical Products on the Boston Post Road in Guilford.

The company already provides breast pumps and other support to nursing mothers.

Now, it will be a donation center that will collect and freeze the milk before it’s sent out to participating Connecticut hospitals.

“Sometimes the mom doesn’t produce milk or maybe she has multiple children and making that much milk is just difficult,” said Jan Ferraro, Acelleron director of education for Connecticut. “It’s for the tiniest babies who need the milk, that is who gets the milk.”

One of the biggest questions asked is about safety. However, organizers assure that this milk is tested more rigorously than blood is for blood donations.

“We test for HIV, HTLV, syphilis, hepatitis B and hepatitis C,” said Ann Marie Lindquist, director, Mother’s Milk Bank Northeast. “And then we test the milk again after it is pasteurized so we’re sure nothing has grown in it. So the milk is not distributed until we know that it’s safe.”

The Food and Drug Administration does not regulate human breast milk, but Mother’s Milk Bank Northeast, which will be processing the milk, adheres to strict guidelines including blood testing all donors before any donation can be made.

Yale Neonatal Intensive Care Unit nurse Jacqueline Ferraro said she has seen first hand the before and after of how breast milk can make all the difference in the world for a sick preemie.

“I’ve seen babies at 1 or 2 pounds started on breast milk go home at 5 pounds in a few months,” she said. “Which is kind of amazing to think they triple their size in just a couple of months and that they can go home and it’s really the help f the breast milk that gets them to that point.”

Eyewitness News asked the state Department of Public Health to weigh in on the safety of milk depots.

“I understand the safety concerns, because these are medically fragile infants receiving this, but actually human milk banking has had a long established safety record in North America since the early 1940s,” Lonczak said.

The depot is supplying milk to Yale-New Haven Hospital, St. Francis Hospital, Children’s Hospital of Connecticut and a list of others.

However, it is looking to expand to more hospitals and ultimately have more locations in other parts of the state.

For further information about donating or receiving milk, contact Mother’s Milk Bank Northeast at 617-527-6263 or log on to www.milkbankne.org.