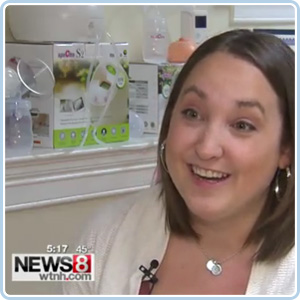 GUILFORD, Conn. (WTNH) – Got extra breast milk? You can help save the life of a newborn.

When a mother gives birth prematurely, sometimes she just can’t produce a milk supply right away. Research shows that human milk is the best prescription for human babies especially for premature and very sick babies.

Amy Farotti is pumped, being the first donor mom in Connecticut, dropping off breast milk her 10 month old daughter Charlotte no longer needs.

She explained, “She might take an ounce or two during the day out of a sippy cup but really she’s eating solid foods while I’m at work.”

It’s the first in the state so that mothers like Amy can donate their surplus breast milk.

“We have a depot in our Massachusetts office,” says Jan Ferraro who runs the milk depot, “And now we have one at our Connecticut office. So moms know where they got their pump from, now they know where they can donate any extra milk they have.”

“I didn’t realize that I could help so many babies with just what I do, naturally,” says Amy.

It’s all going to feed premature babies – struggling to survive.

“Human milk is life saving for these babies. It prevents a devastating disease called Necrotizing enterocolitis that can actually kill babies and human milk reduces the incidence of NEC by 79%,” says Ann Marie Lindquist with Mothers’ Milk Bank Northeast.

It’s the non-profit which distributes the life saving milk.

The process is similar to donating blood, she says, “We’re absolutely vigilant about making sure that the mother has no infections, that she is not taking medications that are inappropriate, we need to make sure she is in good health.”

Amy delivered 122 ounces of breast milk and there’s more of it at home.

Giving back to the most fragile — is important to the Farotti family.

“Why not?” says Amy, “If you have an over abundance of milk, why wouldn’t you?”